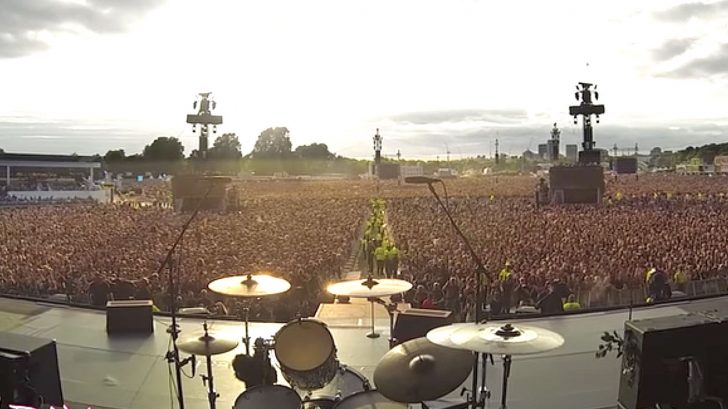 Rock music, by its very nature, is the great unifier. Doesn’t matter what part of this great wide world you call home; when you get to a rock concert and you’re in a sea of people just like you, magic happens, just like it did earlier this summer at a Green Day concert in Hyde Park when 65,000 fans waiting in the sweltering heat united for one seriously epic singalong of Queen’s “Bohemian Rhapsody”.

The June 3rd show was sold out, a sea of 65,000 strong turning out to check out the latest stop on Green Day’s Revolution Radio Tour and enjoying the music playing over the loudspeaker before the band was slated to take the stage when suddenly a cheer rang out as “Bohemian Rhapsody” poured over their ears. Suddenly, as if by magic, the crowd began to sing along – all 65,000 of them belting out every single word, taking the night back to the days of old when Freddie Mercury commanded audiences twice that size, conquering every stage that would have him.

Luckily, Green Day caught it on camera; in fact, they thought the moment was so cool and so poignant that they threw it onto their official YouTube page for the world to see. Where moments like this lose their power when shared after the fact, this singalong did anything but, becoming even more powerful when allowing the world to see the beautiful things rock and roll is capable of and by extension, what we too are capable of.