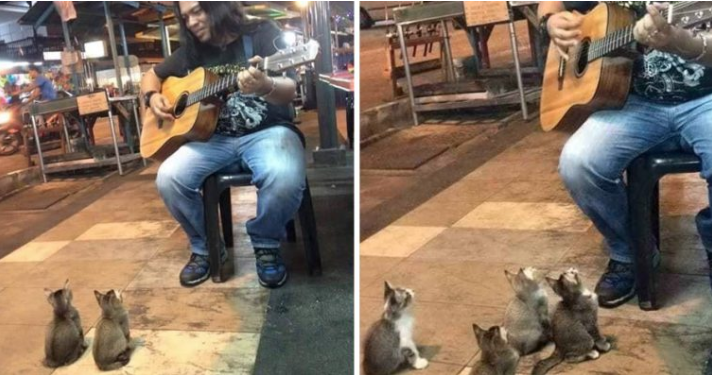 It’s Not Always The Cat’s Meow

Working as a busker can be a lonely and sometimes impossible gig. The streets just aren’t filled with interested strangers most days. Such was the case for Malaysian street performer, Jass. He was feeling a bit disheartened one night after busking in the Pangkor marketplace. It didn’t seem like the singer’s lucky day. Tired of waiting for crowds to develop, the musician started to wrap up his set with one more song.

The 4 cute fans were little 3 month old kittens! These music lovers became dazed by the guitarists strumming and singing. According to the person who recorded the video, the felines only stayed for one song.They sat and moved their little heads along to “Enchanting Beach”- just like an enthralled crowd would.

It’s a safe bet to state that if these cats had any loose change, the performer would have been rewarded graciously. All of the kittens were totally loving the jam. Jass’ hard work and patience certainly paid off. A good attitude is all about perspective and this performer certainly has a paw-sitive mentality. This determined street performer gives us all a little more hope in humanity.

Check out what Jass is up to these days on his Facebook !