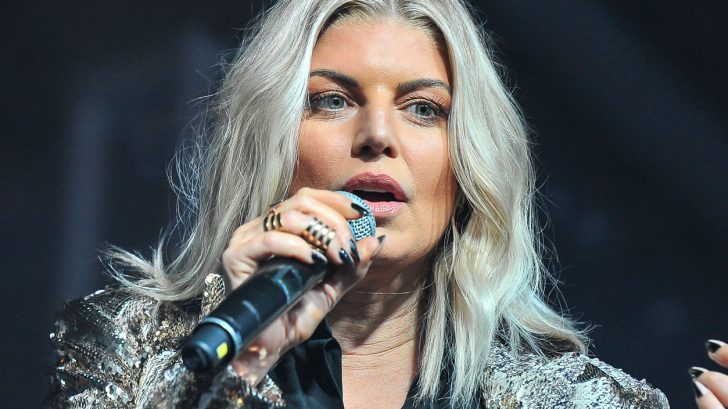 If I were Fergie of The Black Eyed Peas, I’d be staying away from social media for, oh, about the next six weeks – or at least until the blowback stemming from her disastrous performance of “The Star Spangled Banner” began to ease up a little. The 42-year-old 8-time Grammy Award winner made headlines at Sunday night’s NBA All-Star game after delivering a rendition of the National Anthem so bad, Twitter unanimously decided that she did what our government has not yet been able to do: unite a deeply divided country.

Within moments of Fergie’s breathy, Marilyn Monroe/Jessica Rabbitesque “Happy Birthday, Mr. President” take on a song that really, really should not ever be performed that way, Twitter erupted with laughter as it shared reactions from basketball players and celebrities in the audience who were cracking up while trying to figure out just what the hell was going on and why “The Star Spangled Banner” sounded so…different, shall we say, than they’re used to.

We combed through Twitter to find 21 of the most savage reactions to Fergie’s disastrous National Anthem performance – y’all, these are cracking us UP! Make sure you stay tuned til the end to see the brilliant response to Fergie’s statement regarding her performance!

#Fergie managed to do the impossible….Black, white, young and old. No matter what your backround is, or your religious beliefs. Democrats and Republicans. We were all one. UNITED in the belief that she sang the worst version of the #NationalAnthem we have ever heard.

#Fergie sounded like the lady who sings oil spill from bobs burgers pic.twitter.com/bb3Zxp5TMs

My laptop froze at this exact moment #NBAAllStar2018 #Fergie pic.twitter.com/BZj3idORCX

#Fergie sung the national anthem so badly I’m going to listen to Nickelback all day just to get it out of my head.

All the celebrities at last night's #NBAAllStar2018 #NationalAnthem performance looking at eachother like…. #Fergie #fergienationalanthem pic.twitter.com/6WZyq2LSPc

Even with all my faults, can we at least agree that nothing I have done is a terrible as Fergie's National Anthem? #Fergie #fergienationalanthem

The only way the national anthem could sound worse would be if #Fergie had a twin. And it was a duet.

#fergie 's rendition of the anthem was the performance that I didn't know I needed to make me feel really good about where I'm at in life.

During my lifetime, there have been several tragic events that I can recall exactly where I was and exactly what I was doing at those given moments. Fergie's performance tonight is one of those events.
#Fergie

Realtime reaction to Fergie's national anthem be like… #fergie pic.twitter.com/8O9ORPqpuk

The players trying to hold in their laughter while watching #Fergie destroy the #nationalanthem. ????????????#AllStarGame2018 pic.twitter.com/A1ArBV8Cf8

#Fergie just did a Star Spangled Banner so bad, I want to take a knee to protest it. #NBAAllStar

UPDATE: Fergie issued a statement to TMZ, apologizing for her performance: “I’ve always been honored and proud to perform the national anthem and last night I wanted to try something special for the NBA. I’m a risk taker artistically, but clearly this rendition didn’t strike the intended tone. I love this country and honestly tried my best.”

I’d rather listen to Rosanne Barr intentionally wreck the National Anthem than hear #Fergie do her best ever again.