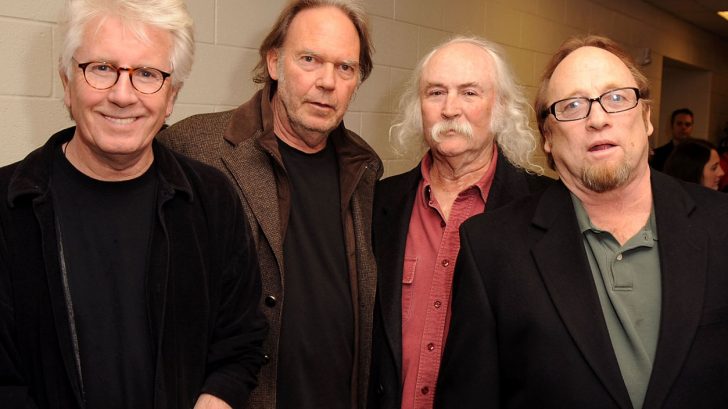 Folk rock supergroup Crosby, Stills, Nash, and Young have had an on again-off again relationship that’s nearly as famous as their music, their feuds stretching on for decades; in fact, Neil Young and Graham Nash aren’t on speaking terms with bandmate David Crosby as of 2018, though Young did say he wouldn’t quite rule out a reunion with Crosby after the 76-year-old walked back negative comments made about Young’s girlfriend, Daryl Hannah. Though it’s not likely that these four will ever hang out and reminisce about old times, it does look like Crosby, Stills, Nash and Young are willing to set aside their dislike for each other in favor of a reunion against the one thing they really don’t like: President Donald Trump.

In an interview with Billboard, David Crosby outlined exactly why the possibility of a CSNY reunion isn’t too far out of the realm of possibility and why the 60s rock legends feel their presence is needed once again:

“We don’t get along, and we haven’t gotten along for a while. They’re all mad at me. But they all dislike Donald Trump very much, the same way I do. We dislike him intensely because he’s a spoiled child who can’t do his job.

So a reunion is possible. We don’t like each other, but we like Trump a whole lot less.”

In case you’re wondering: yes, this unicorn of a CSNY reunion would include Neil Young. After all, that’s kind of the point of a full band reunion, isn’t it?

Though Crosby makes it implicitly clear that he and his former bandmates harbor a serious dislike for the president and that he doesn’t care whether you like it or not, the 76-year-old rocker stresses that he doesn’t indiscriminately “just bash him — I take him apart and hang him up by his thumbs,” he said. “I really, really, dislike the guy. But at my concerts I come down pretty hard on most politicians. I have a very low opinion of politicians.”

So knowing what we know – that 3/4 of CSNY don’t much like David and that they’re all ticked off with him for one reason or another, that David has hope that their mutual dislike for the current administration will bring them together once more – is a reunion likely?

Only time (and Stills, Nash, and Young) will tell.